George Washington Carver is said to have had the largest collection of  Peanut Soup Recipes which was published by the National Peanut Council in 1941.  Peanut soups take many forms with a variety of added ingredients. Carver’s collection contained bisques, soups, purees, and consomme. 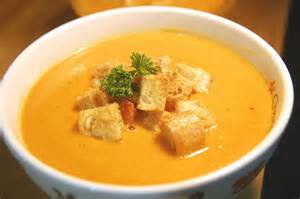 Peanut soup’s main ingredient is, of course, the peanut and so contains a hearty dose of protein, along with many other nutrients.  Considered a dish of slaves during early American history, peanut soup actually dates back to the Incas and probably beyond.  Known for it’s diet mainstays, it was an essential element for those needing inexpensive, healthy foods.

As its health properties became better known, doctors began to recommend it for those with conditions such as diabetes and kidney disease.  No longer just a peasant dish, it became a health food, used to treat and heal.

Today Peanut Soup has taken an even higher ranking role as it often appears in finer restaurants and on classy buffets.  No longer a surf staple, peanut soup is now elevated to the gourmet, owing to it’s flexible ingredients and quite unique flavors.

Peanut Soup is easy to make at home, too.  Some versions use chicken stock; to keep it vegetarian, substitute a mock chicken stock, or use vegetarian broth.

Try this version as a starter, then add your own personal twists t o create the perfect masterpiece for your family!

Peanut Soup can be part of a simple dinner or lunch, and can shine at your next dinner party.  It’s unique color and texture allow for versatility, while the ease of creating it keeps it on the quick dinner idea menu.

Make a double batch and freeze half for an even quicker dinner on those rushed nights when life gets ahead of the family.  Peanut Soup can also be created in the crockpot, welcoming you to the dinner table without last minute preparation.